If one does indeed follow the laughter emanating from the North Coast Repertory Theatre (NCRT), in Solana Beach, one will easily understand why “Laughter on the 23rd Floor”, written by the King of Comedy Neil Simon, has been extended before it opened on Saturday, October 22nd. It now is scheduled to close on November 20, 2016. He’s still got game!

No one writes non-stop one-liners, zingers, and comedy situations like Simon. Now, if only our millennials would turn off their ubiquitous iPhones for two hours and observe the characters and the relatable hilarious situations unfolding on the stage at NCRT, perhaps we can win back theatre audiences for a civilized, critical-thinking, informed, theatre community in the good old USA.  Remember, comedy is the mother’s milk of a well-adjusted society (especially now, in this divided, melancholic 21st century).There weren’t however any divided or unhappy people exiting the theatre last weekend, just smiling, happy faces.

Director Tom Markus lovingly recreates Simon’s memory-filled bio-play about his early days as a comedy writer during the ‘golden age of TV’ on Sid Caesar’s blockbuster smash hit “Your Show of Shows”. Under Markus’ watchful eyes (eyes that have actually watched the original NBC shows) he turns the proceedings into a wild and wacky comedy feast. The pacing is manic, the on-stage action is frenetic, and office banter dialogue in the Writers Room is hilarious.  His fluid and seamless direction has nine high-energy, gifted actors moving and speaking at warp speed without even getting close to an on-stage collision or missing a beat in the process. How do they do it, you ask? It’s called Rehearsal. Rehearsal. Rehearsal!

Theatre actors are like a family; comedy actors are an even more generous, giving, and close knit group of actors. This superb cast of talented comedians and farceurs is filled with first rate actors – all at the top of their game – resulting in a brilliant ensemble effort. Think of the show as something like ‘The Marx Brothers meet Abbott and Costello’ in the fictional Writers Room in the NBC-TV office building in Manhattan on the 23rd floor.

The play, set in 1953 Manhattan, focuses on paranoid Sid Caesar-like Max Prince (a larger than life portrayal by David Ellenstein), the star of a weekly comedy-variety show, and his staff of writers, including Simon’s alter-ego Lucas Brickman played by Brett Alters who maintains a running commentary on the writing, fighting, and zany antics which take place in the Writers Room, especially Max’s on-going battle with NBC executives, who fear his humor is too sophisticated for Middle America. And then the gags, the zingers, and the one-upmanship ploys begin to fly.

Louis Latorto as Milt, a scene stealer if there ever was one, sets the tone for the craziness that follows, and his comedy timing is flawless. Val the harried Russian émigré, is wonderfully played by Nicholas Mongiardo-Cooper an Opera singer/actor and a deft comedian, who nicely balances his role of head staff writer along with a pitch-perfect Russian accent. Brian, the Irishman, and the only gentile on the staff, is pugnaciously played by Christopher M. Williams, who enjoys needling Ira Stone, the staff hypochondriac winningly portrayed by Omri Schein, another bona fide scene stealer. Kenny (played by Phil Johnson), the only writer who seems to be able to reach and deal with the volatile Max, exudes a calmness and common sense that pleases Max, much to the relief of the other writers. Carol, the only female writer on the staff, is solidly portrayed by Amanda Sitton, whose only wish is to be considered as one the ‘guys'.  Helen, the staff secretary, ably played by Caroline Drage, completes the ensemble.

As outstanding as this ensemble is, it is the sensational towering comedy performance of David Ellenstein as Max Prince who sets everything in motion with his entrance, and from then on everything that follows becomes a three-ring comedy circus that leaves the audience drained and exhausted from laughing. 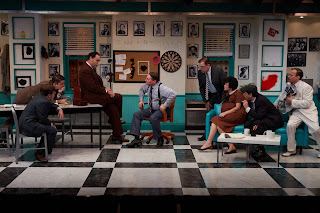 “Laughter on the 23rd Floor” is a stellar production that makes for a most entertaining and enjoyable evening in the theatre, and performs at North Coast Repertory Theatre, in Solana Beach, CA through November 20, 2016.